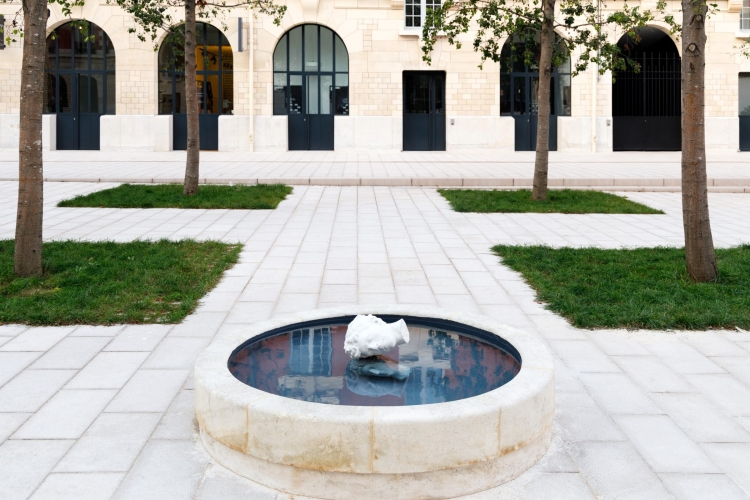 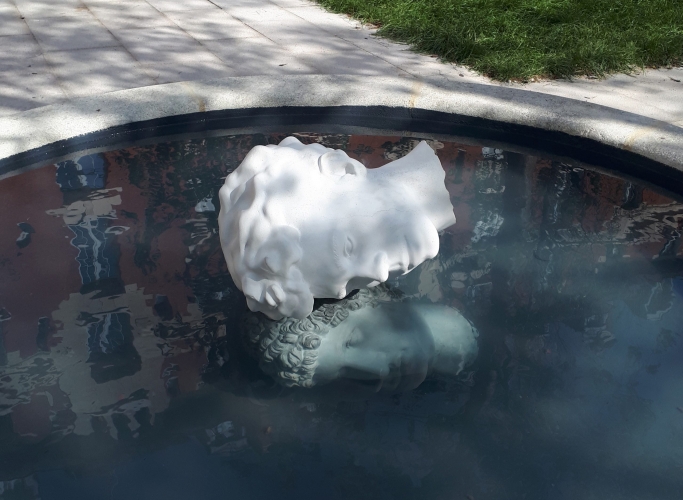 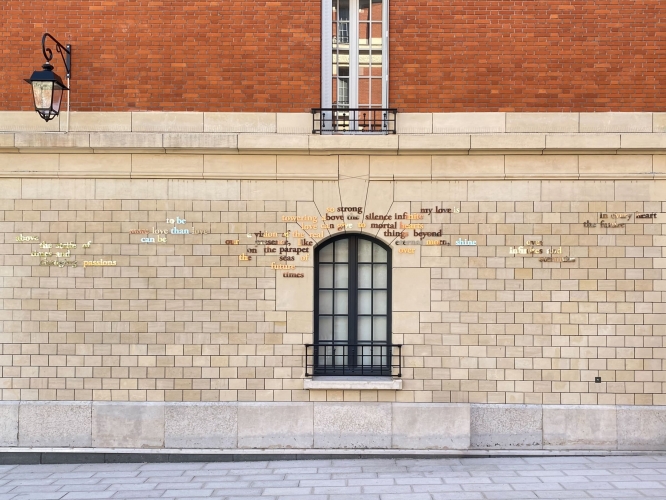 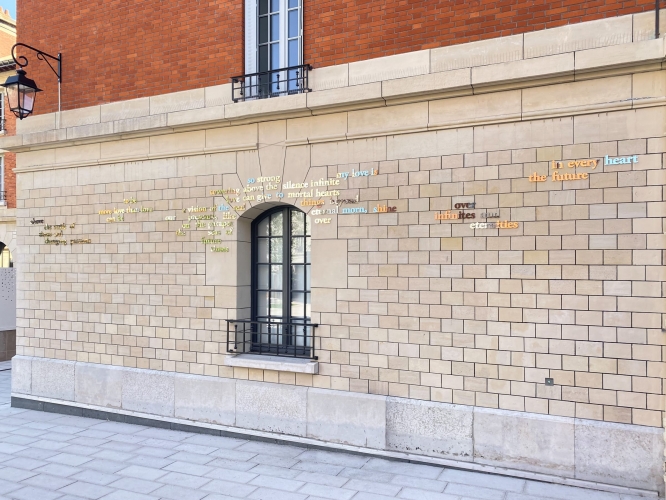 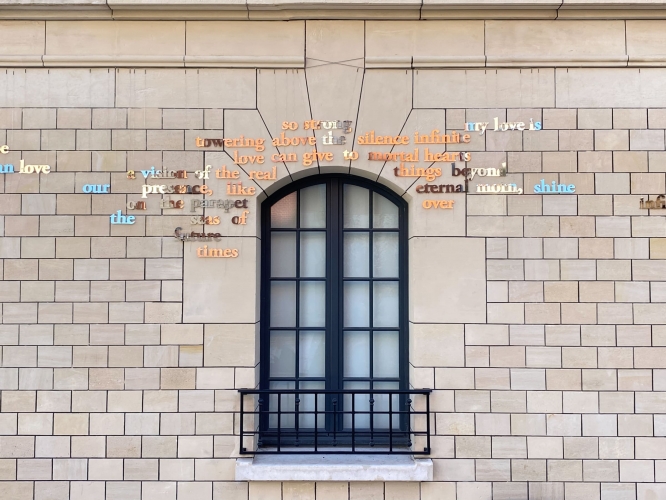 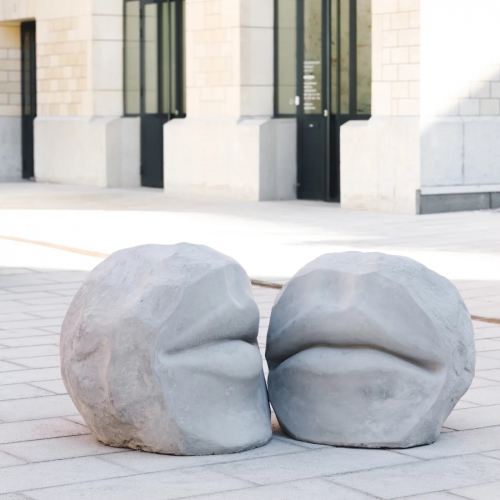 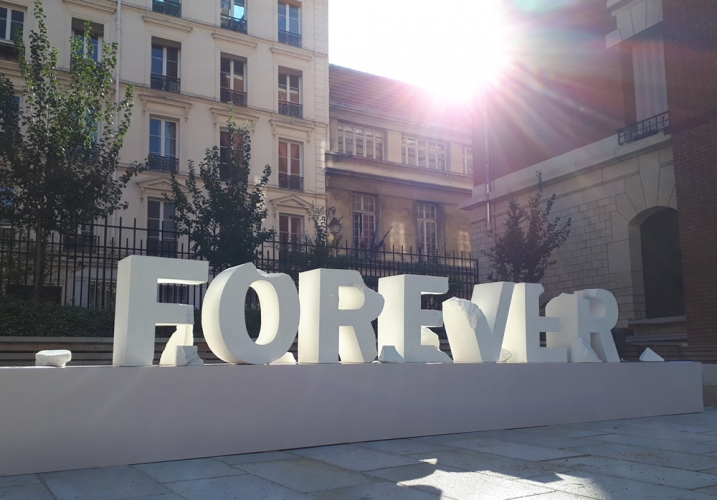 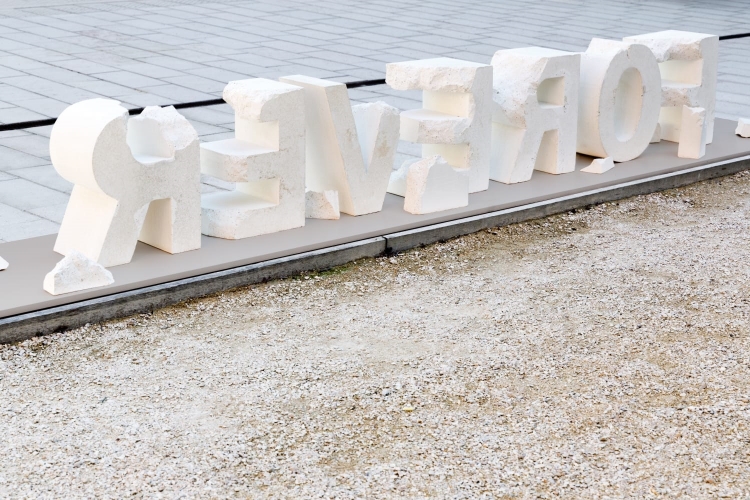 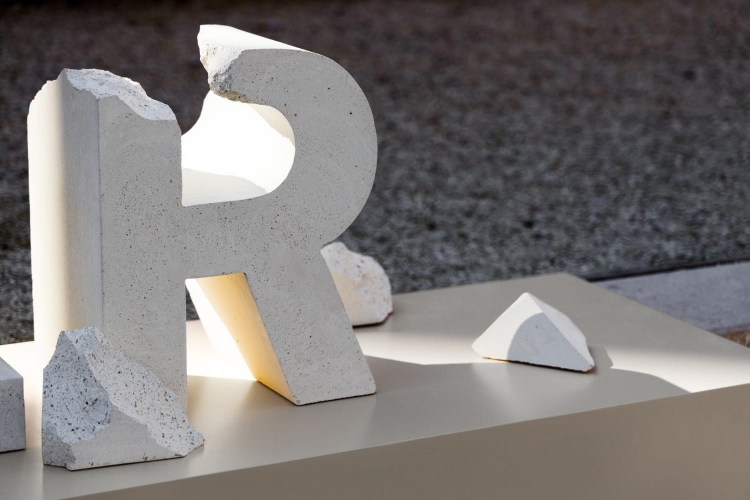 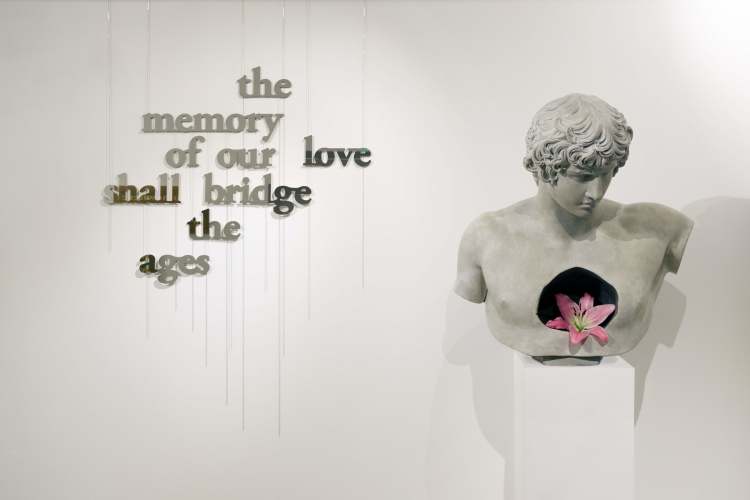 Galerie Marguo is delighted to present Antinoüs, Antinoüs, a new public installation by Laurent Pernot commissioned for the courtyard of the Jardin Arnaud Beltrame. Working across sculpture, video, and text, Pernot’s practice is engaged in the material and poetic articulation of notions associated with the passage of time, such as eternity, impermanence, and memorialization. For this new series, comprising eight works spread across the courtyard and the gallery, Pernot has taken the Classical love affair between the 2nd century Roman emperor Hadrian and his beloved Antinous to explore the temporal and sacred dimensions of love; its eternal and transcendent capacity to exceed the corporeality of its beholder and object.

Hadrian’s liaison with Antinous was remarkable for the emperor’s unabashed emotional devotion, bordering on obsession, to his ephebe. During a journey up the Nile, shortly before Antinous’ twentieth birthday, the Greek youth fell and died in the river under mysterious circumstances. Subsequently, under Hadrian’s command, Antinous was deified – literally transformed from mortal man into immortal god through the power of love. A cult was established by Hadrian in his name, a city titled Antinoopolis was founded at the site of his death; a competitive sporting event similar to the Olympics was established in his memory; and his physical appearance was immortalized by innumerable sculptors – his likeness eventually standing in for the classical ideal of beauty itself.

In the Western canon, the story of Antinous and Hadrian has remained a rich source of inspiration to artists, particularly as a symbol of everlasting – notably, homosexual – love. Among them is the prolific and mysterious Portuguese scribe Fernando Pessoa, whose long form poem, which does not recount the well-known story of their affair, but ventriloquizes Hadrian’s immense grief following Antinous’ death, serves as the basis for Pernot’s installation.

Hanging from the side of the gallery’s exterior wall is Over The Seas of Future Times, a selection of fragments from Pessoa’s text recomposed by the artist in a floating display. Left for the viewer to piece together, Pernot’s redaction mimics the very faculty of memory. As the word ‘re-member’ suggests, to recall a memory is to repeatedly compose a collection of fragmented impressions we store in the mind, thus constructing and reconstructing a new memory in each moment, forever re-cast by the lens of the present, yet capable of eternal resurrection. As such, one way to ensure the perseverance of memory is to present it in fragments, so that it may be continuously reanimated by the viewer. Pessoa’s words are rendered in a mirrored surface, which reflect the passing clouds and changing light, as if to further amplify this intention of engagement, of a simultaneous permanence and transience.

The device of fragmentation, as it pertains to our experience of time and memory, is also at play in the four meter long sculpture Forever, – a ubiquitously employed word in the declaration of affections – which appears to be in a premature state of erosion. The crumbling, yet still legible letters, evoke the persistence of love against the ravages of time. They also bring to mind the 18th century architectural fad for ‘sham ruins’, which appealed to the romantics’ fascination with the past and one’s own mortality.

A century earlier yet, the desire to muddle our relationship with time could be found within still life painting that proliferated among artists who sought to challenge nature, harnessing in oils one eternal moment within the unstoppable tides of organic decay. Within the gallery’s backroom, two opposing conceptions of the nature morte are interspersed among the text-based painting, Somewhere Someday We Will Meet Again, and a third excerpt of Pessoa’s poem. One, The Everlasting Nature of Hearts, features a plaster bust of the godly Antinous on a pedestal. A hole in
his chest harbors a real lily – a symbol of love and rebirth since the Roman era – that will wilt and be continually replaced throughout the exhibition, alluding to the sisyphean efforts that render love eternal. By contrast, Our Endless Love consists of the artist’s signature ‘frozen’ still lifes, in which a bouquet of flowers is embalmed in resin and artificial snow, arresting time and the process of decomposition altogether.

Back in the garden, two stone boulders sit tightly nestled together, adorned on one side with two pairs of touching, sensuously parted lips. The Kiss offers itself as a place for repose or children’s play. The two boulders, while permanently fixed due to their weight, remain nevertheless unattached, frozen eternally in the lingering moment before a kiss’ consummation.

In the center of the courtyard sits the titular sculpture of the installation: a stone basin filled with water, across which two heads – one floating above the meniscus and the other submerged at the basin’s bottom – stare at each other in perpetuity. Water here becomes a material metaphor for the past, as it is both tangible but not solid, rippling and warping what we may see within it, while reflecting our views of the present. The juxtaposition of the ancient materials of water and stone and the modern 3D printed resin heads are echoed by the subjects themselves: underwater lies a
reputedly accurate likeness of Antinous, based on a bust currently held in the Capitoline Museum in Rome. Facing him is the head of the artist’s companion, whose reflection further troubles our view of the distant Antinous. Suggestively positioning Pernot in the role of Hadrian, this arrangement conflates the immortalizing properties of love and art, while activating both as panaceas against the inexorable march of time.